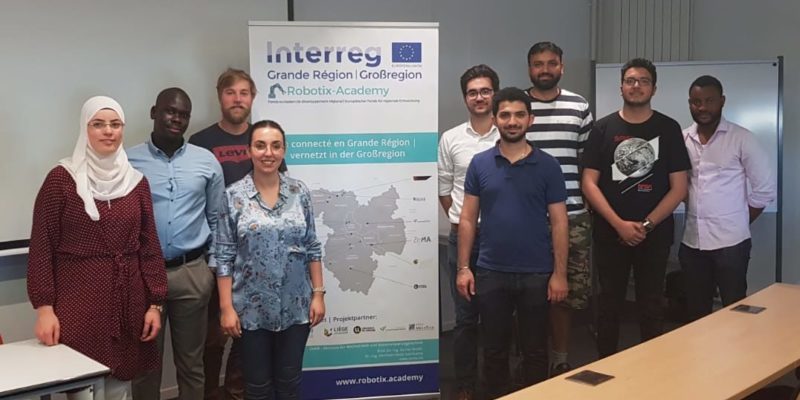 From 04 to 06 September 2019, the third Robotix-Academy Summer School took place at the University of Lorraine.

Scientific staff from all Robotix-Academy partner universities came together to learn from each other in different workshops. It is already the third event of this kind, after the Summer School started in Saarbrücken at ZeMA in 2017 and was hosted by the University of Liège in 2018.

In the Summer School workshops, theoretical principles are put into practice by means of concrete tasks: This year, the University of Metz presented a robotic application in which welding was realized by grinding. The scientific staff of the University of Liège presented a ROS (Robot Operating System) simulation in which a mobile robot was implemented in the ROS environment and controlled autonomously.

The team from the University of Luxembourg gave an introduction to programming an ABB robot. Here, the robot was supposed to move along a given stroke, which the research assistants then had to teach in. In its workshop, ZeMA presented a method for calibrating a moving head. This is set to a surface and can be approached via the x, y and z coordinates. Furthermore, a Node-RED was presented, a web-based construction kit, which can be used to program the moving head.

These and other issues in the context of human-robot collaboration will be addressed and discussed in order to derive added value for further scientific work. The aim of the Summer School is to develop content that will also be of interest to companies in the greater region in the future.

The workshop program was complemented by a team-building event: In the evening, the group visited the performance “Morphosis” at Saint-Étienne Cathedral as part of the “Constellations de Metz”. In this video mapping event, numerous historical events of the city of Metz were visualized and projected onto the cathedral to show it as a contemporary institution in constant change.