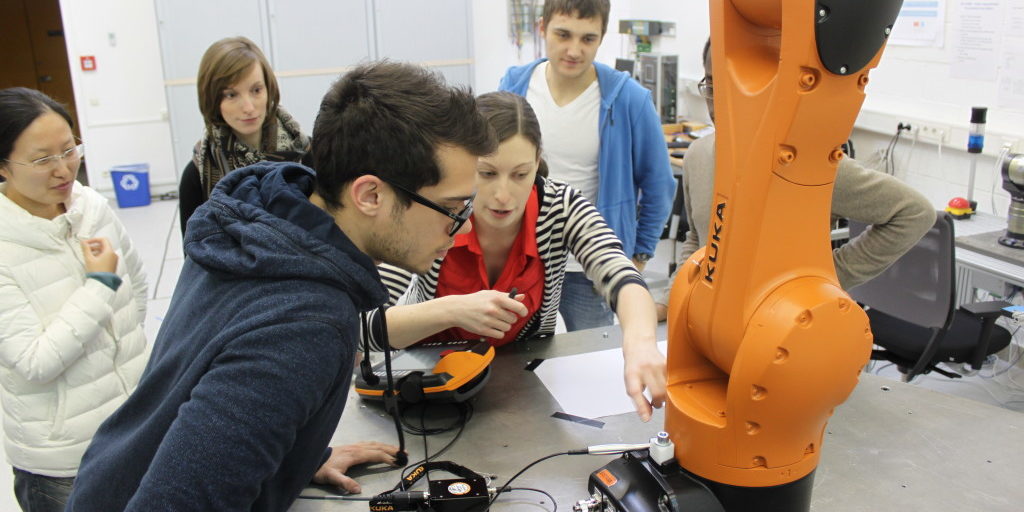 The first Robotix lecture took place on the Kirchberg campus in Luxembourg from February 02, 2015. Prof. Peter Plapper welcomed a total of 32 students from Liège, Saarbrücken and Luxembourg. In the first lectures the students got an insight into general robotics which was further deepened by exercises in the afternoon.

In order to promote intercultural exchange, Dr. Anders Seim from process management consulting AG in Saarbrücken led a teambuilding session. In an international team, students solved various tasks, got to know each other and reflected on their impressions afterwards. This created the prerequisite for successful cooperation, which was to be further deepened in the project work.

On the following day, Prof. Brühls from the University of Liège gave the students a deeper understanding of the control of robot structures, as well as the basics for the path planning of robot systems. At the invitation of Mr. Nigel Ramsen of Fanuc Europe Corporation, the students were able to visit the plant in Echternach, where many robot applications were shown in practice. Dr.-Ing. Kleinkes from Espace picked up on these practical examples in his lecture and presented measurement techniques that could be used to further increase the accuracy of robot systems.

Another focus of the lecture was direct human-robot cooperation. In the process of developing new lightweight robot systems, direct human-robot cooperation is possible without additional protective devices. This branch of research is currently being investigated at the Center for Mechatronics and Automation Technology gGmbH in Saarbrücken. Prof. Dr.-Ing. Müller was able to let the students participate directly in the knowledge gained there and showed various robot systems in his lecture, which the students were also allowed to operate as part of the exercise.

In order to be able to offer the students a cultural evening program outside of the lecture, sponsorships were collected from companies within the Greater Region. Due to the generous financial support, it was possible to provide the students with lunch and dinner during the week and, in addition, a guided tour of the city could be offered. In return, the sponsors were given the opportunity to present their company at a sponsor evening and to actively recruit future engineers.

The week ended with a project. In an international team, the students worked on robot applications and then implemented them. They worked on applications such as the application of adhesive to a door model, the sensitive assembly of valves in an engine block, pick-and-place tasks, and a dice game with integrated visual evaluation. Visibly proud, the individual groups presented their excellent results, which they achieved in the short processing time.

At this point, on behalf of the professors, students and participants, we would like to express our sincere thanks to our sponsors for their generous financial support, without which the execution of such a course would not be possible.