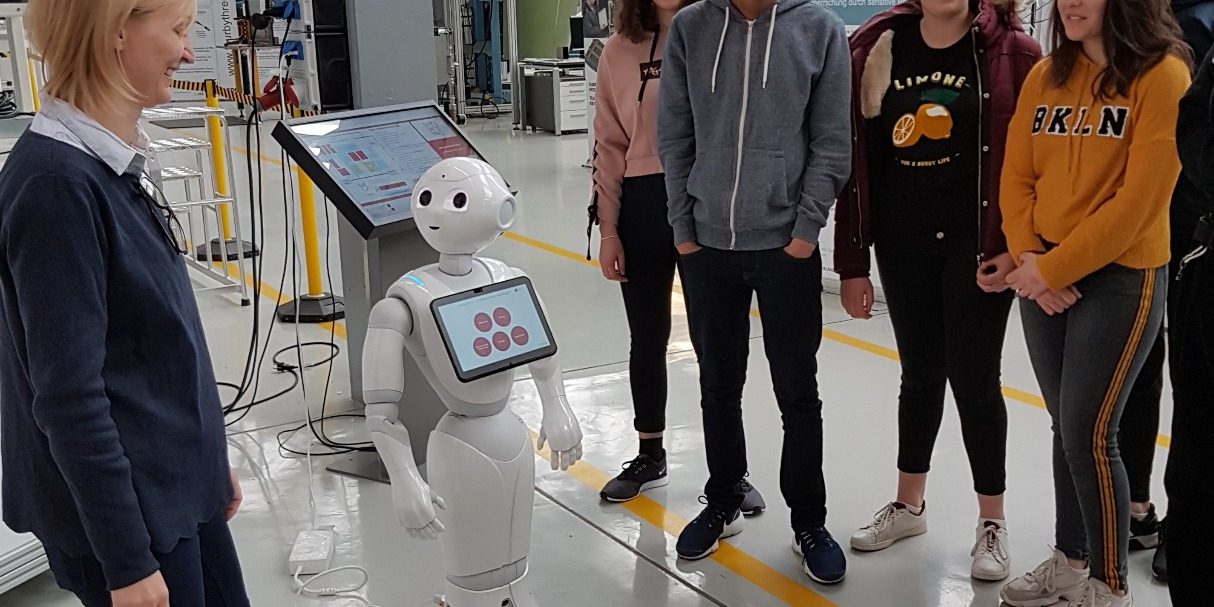 On April 05, 2019, a group of pupils from the Gymnasium am Schloss visited ZeMA together with their exchange partners from Thionville. 14 German and French pupils of a 9th grade each had come to ZeMA to participate in a workshop on the topic “Our future in 30 years – latest developments and technologies”.

During the two-hour guided tour in German and French, the students were able to experience first-hand what research means: Fabian Adler and Daniela Schmidt, research assistants at ZeMA, took the students on a tour of the research institute’s demonstrator landscape. The students were able to take a look at numerous demonstrators from the fields of automation and human-robot collaboration and hear the scientific staff explain the application examples.

In particular, the interaction between man and machine using smart devices such as mixed reality glasses attracted the attention of the students. Here they were able to try out for themselves how robots and workers share tasks, depending on the ability and requirements of the assembly process.

These and other methods of partial automation are also (further) developed within the two Interreg projects Robotix-Academy and COTEMACO, which are carried out at ZeMA in the current program period (2014-2020). Cross-border learning and research with other European partners as well as technology transfer to the region’s industrial SMEs are the goals of these projects, which are supported by the European Regional Development Fund (ERDF).

The lively interest of the students – not least in the robot lady Pepper – shows that the next generation of researchers is already forming. All that is needed is for someone to arouse the curiosity and enthusiasm of the young people.