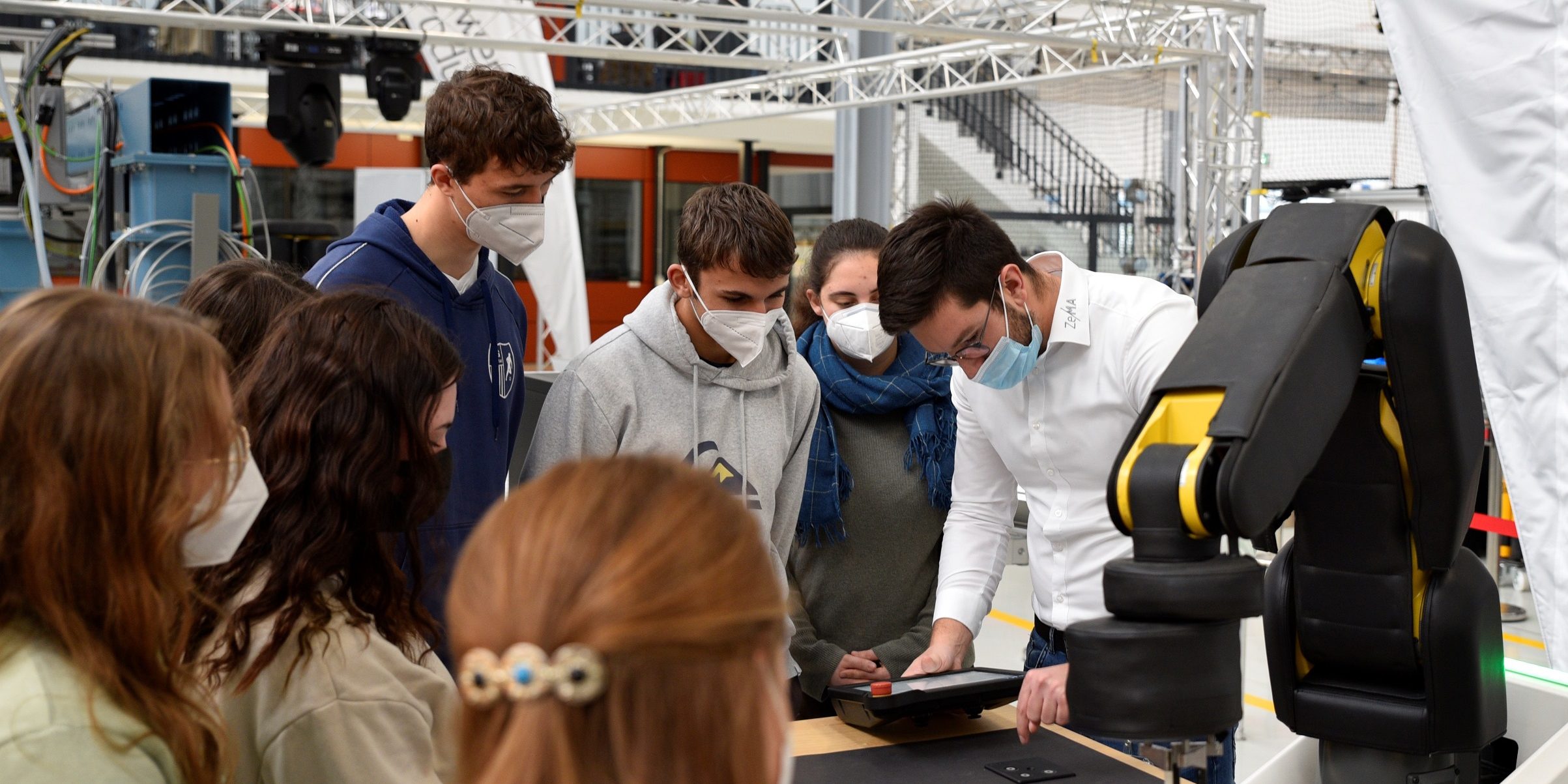 On November 18, a group of pupils from the Johannes Kepler Gymnasium in Lebach visited the ZeMA. About 20 pupils of the 12th class of the MINT section came to Saarbrücken accompanied by two high school teachers to participate in a practical workshop on the topic of industrial robotics and human-robot collaboration in the context of the Robotix-Academy.

No less than four scientific staff members of ZeMA supervised the students during the workshop, which could finally take place in presence again after the numerous pandemic-related restrictions. After a short introduction of ZeMA gGmbH and the Interreg project Robotix-Academy, the pupils received information worth knowing about the profession of an engineer as well as the corresponding career and study opportunities in the Greater Region.

Before moving on to the practical part, the scientists gave the students a brief introduction to human-robot collaboration (HRC) and the subsequent programming tasks. After that, the students were allowed to get active themselves: Divided into three groups, the student teams could now each program a robot to perform simple Pick-and-place tasks.

In the first workshop, the students were able to perform a camera-based pick-and-place task on a Bosch APAS robot: First, the component to be gripped was taught to the camera system installed in the robot. This was followed by motion programming including automatic component recognition from gripping to placing the component.

The second workshop dealt with a tic-tac-toe game: the students were able to play tic-tac-toe against the MRK robot on a Universal Robot UR3 and learn about the challenges involved in programming and implementing such a task. Concrete contents were the interaction of robot, gripper, camera system and artificial intelligence.

In the third workshop, the task was to find a solution to a dissection puzzle with the help of a KUKA KR 6: First, the students were given a brief introduction to the topic of “artificial intelligence” and the algorithms used in the solution, such as K-nearest neighbours, decision tree and deep Q-learning. Then the implemented solution for the Tangram game was presented. Finally, the students were able to programme the gripping of the puzzle pieces with a vacuum gripper.

After about 2.5 hours of hands-on workshop, the scientific staff took the pupils on a technology tour through ZeMA: Numerous demonstrators from the fields of automation and human-robot collaboration were shown and corresponding application examples explained, such as 4by3, AutoIBN and the safety demonstrator. The various working groups at ZeMA were also briefly mentioned.

The feedback from the students and teachers was quite positive: The students benefited in particular from the practical work on the demonstrators and at the same time had numerous questions for the scientific staff. They were pleased about the lively interest of the students and hope that the next generation of researchers is already forming here.